We look forward to the start of the 2023 season...
Ballooning.ltHow does balloon fly

How does balloon fly 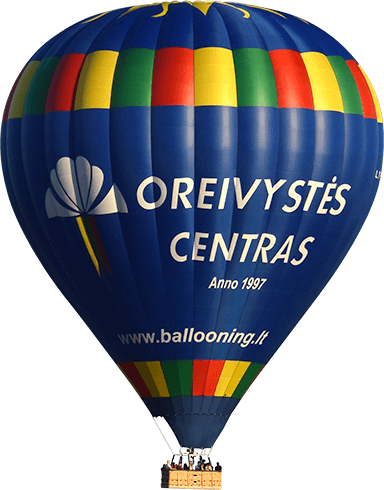 Hot air balloon is lighter than air and driven not by engines, but by heating the air which is in the envelope. Balloon always flies leeward, i.e. there, where the wind blows and as far as it blows.

In summer hot air balloons flights usually take place in the morning (5am-9am), while termics (vertical air flows) do not start and in the evening (6pm-9pm), when termics become quiet. In autumn- spring morning flights start a bit later (8am), and evening – earlier (4pm).

The average duration of the flight by air balloon is one hour, even though technically it can fly 2-3 and more hours.

In one hour hot air balloon flies 10-20 kilometres on the average.

Preparation for the flight

Having the aim of the flight, knowing direction of wind and windspeed the pilot can plan the trajectory of the flight. As meteorological situation constantly changes, it is impossible to plan the flight or place of landing exactly. Therefore, when choosing the place of take off the pilot always has to evaluate whether there are enough landing places for safe landing in the direction of the flight.

If the flight over the city is planned then the pilot of air balloon must have the permission of Municipality and Civil Aviation Authorities (CAA) and just before the flight the pilot has submit his flight plan to the Air Traffic Service.

Flights over city are also peculiar because the services of air traffic control are provided during it. Therefore, the pilot has to prepare his maps carefully and to regulate all details with the Air Traffic Service.

The flight by hot air balloon starts of launching the balloon. Hot air balloon is launched by the pilot and all his crew, 4 people in total. Passengers, of course if they agree, are also included in this process. For passengers it is not less fascinating sight than the flight itself.

First of all, the appropriate place for take off is to be chosen. It is better when it is not smaller than 50×50 metres size lawn. There can not be any obstacles: trees, poles, electric lines in the lawn. When the wind is stronger, they look for a lee.

When the place is chosen, all equipment of air balloon is unloaded. Burners are put on the basket; they are joined with gas cylinders by special hoses. The pilot tries how burners and the system of gas supply work.

Then envelope is stretched. The envelope is always stretched leeward. The dome is joined with the basket and burners by special carbines.

Cold air is blown into the envelope by special ventilators.

Before blowing hot air balloon is tied to the car. This is done with the purpose that the wind would not precipitate not completely prepared balloon. When the pilot is sure that the passengers and balloon are ready for the flight and when the air in the envelope is warmed up to appropriate temperature, air balloon begins to rise. Then the balloon is released from the car and it flies up.

Even though the flying of air balloon seems simple, really it requires special flying knowledge and skills.

Many people have a question: if the pilot can control only the height of the flight, how then the balloon flies to the place required?

The answer is here: the conditions of atmosphere are used for the flight by air balloon. Wind speed and wind direction differ in different heights. Therefore pilots can change the flight direction of balloon by changing vertical balloon position. Wind speed usually is bigger in higher layers of the atmosphere, therefore the pilots can partially control the speed of the flight as well.

On the other hand, even very experienced pilots can not totally control the direction of the flight of hot air balloon. Usually the conditions of wind provide the pilot little choice. It happens very rarely when it is possible to come back to the place of take off. Therefore, the flying of hot air balloon is usually improvisation according to conditions existing.

Hot air balloon is always followed by the team on the ground, which later helps the balloon to land, to gather up equipments and take passengers.

Even before the flight the pilot preliminary plans in which place they are going to land. This information is given to the crew on the ground by telephone or radio connection.

Usually there are no any special requirements for a landing place. It is important that it would be big enough for safe landing of the balloon and that landing balloon would not make any damage to land owners. If the wind is not strong, the balloon can land in simple stadium. If the wind is stronger, the pilot looks for bigger field for landing.

Experienced pilots are able to land the balloon so that contact with the ground is hardly felt. The crew also helps to land the balloon. However, when the wind is stronger, the landing of air balloon can be “tougher”. The pilot instructs passengers how to behave during “tough” landing just before the flight. For majority of the passengers such landing is the most interesting part of the flight.

Usually the pilots try to land by the road, so that the leading car could approach. But sometimes the balloon lands in a big meadow. In such a case the crew and helpers have to carry the balloon to better place.

When the pilot opens the valve of the envelope, the air goes out from the envelope. The balloon tilts and lays on the ground. The team of the ground finally deflates the air and packs the balloon.

The process of balloon’s pickup lasts for about 20minutes.